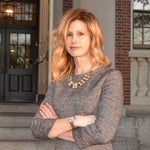 Attorney Larsen has been aggressively representing clients throughout the State of Rhode Island at the Law Office of Melissa Larsen, Esq. for over a decade.  Prior to starting her own firm, Melissa was a prosecutor in the criminal division at the Rhode Island Attorney General's Office. Melissa spent seven years prosecuting criminal cases as a Special Assistant Attorney General.  At the AG's Office, Melissa successfully handled thousands of adult and juvenile criminal cases involving all types of crimes including child abuse, domestic assault, cybercrime, narcotics offenses, DUI, chemical test refusals, white-collar crime, sexual assault, child molestation, and homicide. Her experience at trial and with pre-trial negotiations is an invaluable asset to her clients.

Prior to her work as a prosecutor, Melissa worked in the Private Clients Group at FleetBoston Financial, now Bank of America, developing financial strategies to ensure her clients a sound financial future. Melissa's unique combination of corporate and litigation experience helped to make her an organized, effective, compassionate, and invaluable advocate for her clients.  Melissa is able to work with all types of clients and can address a full spectrum of legal needs in a personal and professional manner.

Melissa was born and raised in Cranston, Rhode Island.  She is a graduate of Cranston High School East and the University of Rhode Island, where she received a degree in political science.  Melissa obtained her law degree from Western New England College, School of Law. She is admitted to practice in the State of Rhode Island and in the United States District Court for the District of Rhode Island.

In her spare time, Melissa enjoys chasing after her young daughter, riding her Peloton bike and relaxing at the beach.

Thank you for contacting us. We will get back to you shortly.

Please complete all required fields below.

Attorney Larsen Is Here for You

Melissa Larsen is prepared to answer your questions regarding DUI/Chemical Test Refusals, Criminal Defense, Family Law, and Personal Injury cases in all four Rhode Island counties. Attorney Larsen is eager to discuss your case, contact her today for a free consultation.